How to protect museum collections from earthquake damage

Jerry Podany, a leading authority on seismic protection of collections, and McKenzie Lowry, an expert in seismic mount making, led the virtual workshop Earthquake Damage Mitigation for Collections, which took place from November 29 to December 1, 2021. The workshop, organized by the Conservation and Restoration Department of the Arts Academy in Split and Museum Documentation Center, was aimed at museum and heritage professionals, custodians of religious and private collections, and members of the academic community in Croatia and neighboring countries. The goal was to provide practical solutions to reduce the risk of damage to museum collections caused by earthquakes. Both Podany and Lowry worked at the J. Paul Getty Museum, located in the highly active seismic zone in Los Angeles, which is why they started working in this particular field.

Seismic damage mitigation is a team effort and requires the cooperation between museum staff and experts from various disciplines. Conservators, curators, set designers, and technicians should consult seismologists, engineers, and architects to understand what kind of earthquake to expect. Based on that, they can assess the vulnerability of their collections and take appropriate action.
Museum and heritage experts cannot competently talk to experts without a basic understanding of the nature and mechanics of earthquakes. For this reason, on the first day, Podany gave a lecture on basic seismology, introducing concepts essential for understanding the nature of earthquakes. He showed how earthquakes are recorded and measured and how statistical methods can help to predict the magnitude of earthquakes in a given area and a given period.

On the second day, the workshop centered around the issue of how to estimate an object’s response to seismic forces transmitted through the building (floors and walls) and fixtures (pedestals, cases, or shelves). Podany explained how to calculate and increase the stability of an object and mitigate earthquake vulnerability. Adding weight in the lower part of the object or object assembly does not automatically result in higher stability—a much more effective method is to adjust the aspect ratio by increasing the footprint dimension. It is not necessary to run calculations for each object in the collection, but one or two representative examples.
One must also consider the non-structural elements of the building, such as pipework, ceiling panels, temporary walls, lighting fixtures, shelves, even signage and label holders, which can pose a hazard.

The last day of the workshop started with the lecture on assessing the vulnerability of an object to earthquakes. Podany pointed out that the most important thing to record in vulnerability survey form is whether or not the object will be stable—will it rock, will it overturn, or will it slide off the surface? How is it exhibited or stored? Is it on a shelf, is it in an exhibition case, is it standing on the floor or hung on the wall, is it standing on a pedestal, is it suspended? Is the object anchored, or is it restrained? Is it a single object, or is it an object assembly? Answering those core questions gives us a better understanding of how an object might respond to an earthquake and enables us to initiate appropriate mitigation measures. Equally important is a post-earthquake survey that can show us which measures were effective, which ones failed and why.

McKenzie Lowry offered practical solutions for protecting collections in museums. A more common and affordable approach to seismic mount making is to stabilize the object by attaching it with different holders to a static surface. The technologically advanced method is to fasten an object to a specially designed non-static base that filters out the destructive earthquake forces in a controlled horizontal movement and reduces their transfer to an object.
The methods used should be efficient and visually unobtrusive. It is necessary to document object mounts to instruct staff on the safe way of removing objects from the display and indicate to the borrower how to care for objects on loan.

Video recordings of all three days are available on the YouTube channel of the Museum Documentation Center.

Jerry Podany is one of the contributors to the upcoming issue of the Muzeologija journal dedicated to the topic of earthquakes. 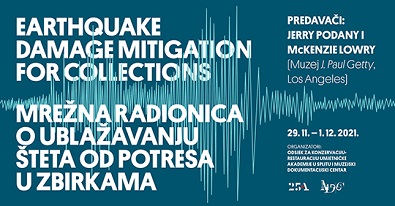 Jerry Podany, model of an object with potential breaking points